Relations with Spain in the Ogosho period

Flamenco is an art form that originates mainly in the Andalusia region of southern Spain, and was registered as an Intangible Cultural Heritage of Spain by UNESCO in 2010.

Spain was actively expanding overseas under King Felipe II in the 16th century, following Columbus' discovery of the New World.
At this time, Spain was the most powerful country in the world, with a vast territory that included Italy, the Netherlands, and the New World.

Spain then crossed the Pacific Ocean and occupied Manila (the Philippines) as a base for its expansion into Asia.

On July 25, 1609, three ships of Rodrigo de Vivero, who had completed his term as governor of the Philippines, left the port of Cavite in Manila and set sail for Mexico. These three ships were to return directly to Mexico.

However, a storm hit the ship on the way, and on September 30, 1609, the San Francisco with Don Rodrigo on board was shipwrecked off the coast of present-day Onjyuku-machi, Chiba, and the Santa Ana washed up on the coast of Bungo.

The San Francisco was a huge ship at the time, weighing 1,000 tons. 56 of the 373 people on board drowned in the wreck, and 317 were rescued by the villagers. 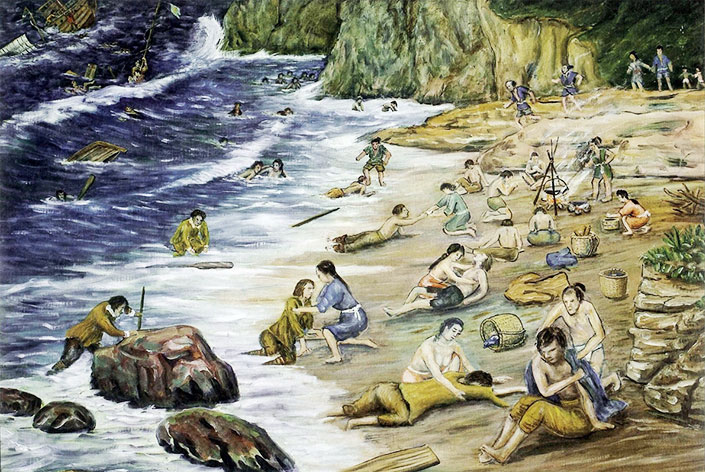 There is a touching story of how local divers revived the drowned sailors by warming them with their body heat.

At the discretion of Honda Tadatomo, the lord of Otaki Castle, those in distress were gathered together in Otaki Castle and at Iwaida Omiya Shrine, where they were given generous protection along with the villagers. Honda Tadatomo sent an envoy to Ieyasu in Sunpu to wait for his decision on how to deal with them.

Upon receiving this news, the great lord Tokugawa Ieyasu ordered the group to be politely brought to Sunpu Castle.

A representative of Rodrigo de Vivero's group went to Sunpu.

Rodrigo de Vivero then went to Edo to meet the second shogun, Hidetada, and then came to Sunpu to meet Ieyasu.

Ieyasu had made arrangements for the Vivero party to stay in Japan, and had also ordered William Adams, who had drifted to Oita about ten years earlier and had been Ieyasu's diplomatic advisor, to build two Western-style sailing ships in Ito on the Izu Peninsula.He prepared the larger of the two ships (120 tons).He named the ship the San Buenaventura (meaning "holy ship that carries happiness") and ordered 21 Japanese, including Syousuke Tanaka, to take the Bibelos to Mexico on the ship.

On June 13, 1610, the ship carrying Vivero and his party set sail from Uraga and returned safely to Mexico on October 23.

About a year later, in 1611, King Felipe III of Spain officially sent Ambassador Sebastian Viscaino as a diplomat to Tokugawa Ieyasu in Sunpu.

The purpose of the expedition was ostensibly to thank Don Rodrigo and others for borrowing a Japanese ship and allowing them to return home safely, but in reality, the purpose was to discover the "Gold and Silver Islands" that were said to exist in the seas around Japan, and to survey the islands and harbors in Japan that could be used by Spain to invade Japan in the future.

The clock from that time is Ieyasu's Western-style clock, which is an Important Cultural Property and is now in the possession of Kunouzan Toshogu Shrine.

It was through this connection that King Felipe VI of Spain and Queen Leticia visited Shizuoka with Their Majesties the Emperor and Empress on April 7, 2017, and visited Shizuoka Sengen Shrine.

This was the beginning of the Flamenco Festivals held at the Aoba venue during the Shizuoka Festival.

Origin of the Shizuoka Festival